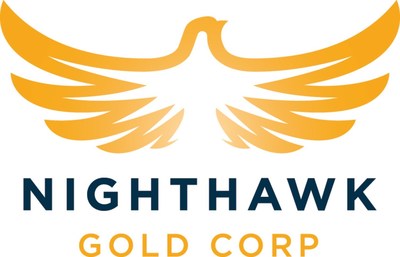 Dr. Michael Byron, President and CEO commented, "Leta Arm is one of our principal projects, and a prime example of the type of emergent opportunity that exists in this juvenile gold camp. Given the camp's underexplored nature, we believe that many other prospects of similar magnitude remain to be discovered. Leta Arm is also a strategic asset in terms of our objective of delivering potential satellite gold ounces to augment any future Colomac production scenario. Â In March we launched our 2018 campaign with three rigs drilling the four Leta Arm deposits. Initial results have shown the expansion potential of the North Inca vein systems and validated our latest exploration model.Â  We are awaiting the findings of our recently completed Induced Polarization survey, as results of that work are expected to assist with future drill targeting throughout the Leta Arm corridor and may also provide valuable insight into any possible relationship between the four deposits. Additional results will be released as they become available.

"Two of the three drills are now working the Colomac area deposits and will remain there for the duration of the 2018 program, while the third rig will be active on several of our regional deposits and priority targets including the high-grade Damoti Lake gold deposit."

Leta Arm is located 210 kilometres north of Yellowknife, Northwest Territories, along the northern extension of the West Bay â Indin Lake Fault Zone (WBILFZ); a major regional structure hosting the past producing Giant and Con Gold mines to the south (~13 million-ounce historical gold production), and the Colomac gold mine (~500,000-ounce historical gold production) within its northern extent. Nighthawk's Diversified, North Inca, Lexindin, and Number 3 gold deposits, as well as several gold showings, lie within the Leta Arm Fault Zone, a north-south oriented regional deformation zone upwards of 10 kilometres long and 500 metres wide located within the northern extension of the WBILFZ where it transects the central portion of the Indin Lake Greenstone Belt.

Exploration shafts and limited underground development were completed on the North Inca and Diversified gold deposits in the late 1940's and early 1950's exploring multi-stage quartz veins characterized by high-grade gold mineralization. The Diversified mine is 1.3 kilometres north of the North Inca mine with the Number 3 deposit lying between them and the Lexindin deposit an additional 1.2 kilometres north of Diversified. All deposits lie along a linear array and remain open laterally and vertically, suggesting that they may be part of a single extensive yet underexplored system.

Nighthawk drilled 39 holes (10,536 metres) in 2011 on the four Leta Arm deposits testing a 2.4-kilometre-long section of the Leta Arm Fault Zone. Renewed exploration activities in 2017, following up on the 2011 program, drilled two holes (1,314 metres) into each of the eastern and western North Inca vein systems (see press release dated January 17, 2018). Results to date have exceeded expectations by establishing significant zone widths, confirming the potential for zone expansion, and for new discoveries as nothing has been drilled below 100 metres in depth. Very little historical exploration has focused on the Leta Arm region despite the abundance of surface gold showings and shallow deposits (see press release dated April 12, 2018). The Company recently finished a ground Induced Polarization geophysical survey over the area between North Inca, #3 and Diversified, to help explore their flanks and to determine if there is a connection between the three deposits. That data is currently being processed. Let Arm is a priority target for Nighthawk as the Company believes this mineralized corridor is ripe for discovery.

North Inca consists of several parallel north-striking quartz-rich veins spanning a highly strained contact zone between metavolcanic and metasedimentary rocks (Figure 1). The East Zone lies within metasedimentary rocks while the West Zone is hosted by metavolcanic rocks, and the en-echelon nature of their veins suggests they may continue along strike and repeat to depth. Nighthawk's recent geological modelling depicts a steep northern plunge to the mineralized system and has formed the basis for target generation at North Inca and the other Leta Arm deposits in 2018.

Nighthawk's initial 2011 drilling focused on validating the limited historical data available for the near surface eastern and western vein systems, to establish whether the mineralization spans laterally into the host country rock or is restricted to the quartz veins, and to explore the vein systems along strike and to depth. Results were encouraging as several high-grade intersections were reported with zone widths much wider than previously recognized. The program was also successful in the discovery of new zones and extending known zones laterally and to depth (see press releases dated June 15, 2011; September 6, 2011; and November 21, 2011). Â The Company's drilling in 2017 tested both vein systems by undercutting mineralization and infilling gaps between 2011 holes, confirming continuity, and extending mineralization to new depths (see press release dated January 17, 2018).

Nighthawk's 2018 drill program began in early March with three rigs working the four Leta Arm deposits. Results reported in this news release cover the eleven holes that were drilled at North Inca, of which nine tested the East Zone and two holes were directed at the West Zone. All holes were laid out based on the Company's recent structural modelling that shows a steep plunge to the north for the en-echelon sub-vertical mineralized vein zones.

NI18-05, was drilled to test the central area of the East Zone to depth 50 metres north of NI18-03 and 25 metres south of NI18-01. This was the deepest hole drilled in the program, intersecting the modelled mineralization 120 metres below surface, and returning 11.25 metres of 3.26 gpt Au, including 8.25 metres of 4.16 gpt Au, and including 2.25 metres of 8.35 gpt Au (Figure 3). Two holes were drilled from a single setup 80 metres north of NI18-01 to explore the northern extension of the East Zone. Both holes intersected the zone's projected extension to a depth of 80 metres.

NI18-02 and NI18-02B were collared to test the southern extension of the North Inca West Zone, 40 metres south of previous drilling. The shallower hole, NI18-02, appears to have overshot the plunging zone and encountered limited mineralization, while the steeper hole, NI18-02B, intersected a better mineralized portion of the zone returning 9.25 metres of 4.49 gpt Au, including 4.25 metres of 6.52 gpt Au, and including 2.25 metres of 10.45 gpt Au, effectively extending the zone southward where it remains open.

The primary objective of the 2018 Leta Arm drill program was to follow up on the Company's previous exploration and utilize its newly defined structural model to help direct target generation. This has proven successful as the latest step out holes drilled at North Inca have extended known mineralization laterally and to new depths, continued to confirm the high-grade nature of the mineralization, and expanded the widths of the mineralized zones. North Inca continues to deliver encouraging results and remains open in all directions.

The Company continues to aggressively explore this highly prospective mineralized corridor, focused on making new discoveries, expanding the four known deposits, and examining their possible integration along strike, all of which will enable the Company to begin defining potential ore bodies. Drill results from the recently completed exploration program at the Diversified, Number 3, and Lexindin deposits will be released shortly. 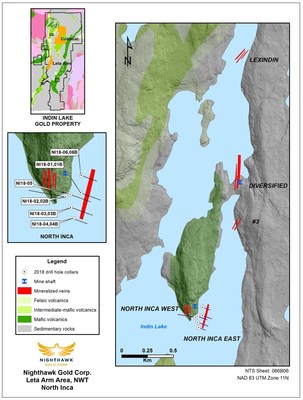 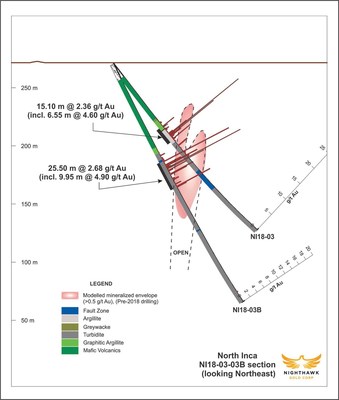 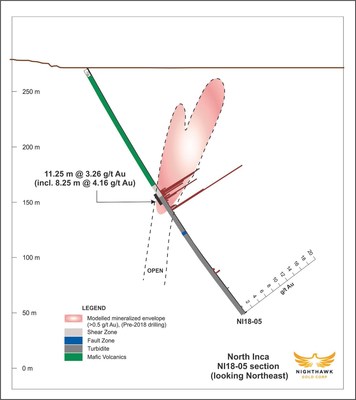 Nighthawk has implemented a quality-control program to comply with best practices in the sampling and analysis of drill core.Â  Drill core samples were transported in security-sealed bags for analyses at ALS Chemex Assay Laboratory in Vancouver, BC ("ALS Chemex").Â  ALS Chemex is an ISO 9001:2000 certified laboratory. Pulp and metallics assaying for gold was conducted on the entire pulverized sample.

Dr. Michael J. Byron, Ph.D., P.Geo., President & Chief Executive Officer of Nighthawk, who is the "Qualified Person" as defined by NI 43-101 for this project, has reviewed and approved of the technical disclosure contained in this news release.Â

This news release contains "forward-looking information" within the meaning of applicable Canadian securities legislation. Forward-looking information includes, but is not limited to, information with respect to: any possible relationship between the four deposits at Leta arm; the Company's exploration programs including drilling, and the timing and results thereof; and any potential for future production at Colomac. Generally, forward-looking information can be identified by the use of forward-looking terminology such as "plans", "expects", or "does not expect", "is expected", "budget", "scheduled", "estimates", "forecasts", "intends", "anticipates", or "does not anticipate", or "believes" or variations of such words and phrases or state that certain actions, events or results "may", "could", "would", "might", or "will be taken", "occur", or "be achieved".