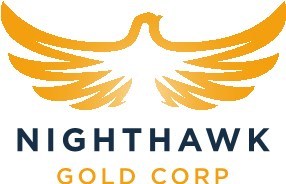 Dr. Michael Byron, President and Chief Executive Officer said, "Zone 2.0 is the location of the former producing open pit. It is also the widest section of the sill and contains the largest portion of the current resource. With these latest results we have successfully traced a newly discovered continuous higher-grade corridor within the southern part of the zone, to a vertical depth of almost 350 metres where it remains open in all dimensions. These results are a true testament to the sill's remarkable untapped endowment. Being largely unexplored to depth, we consider this area to be extremely valuable for resource growth opportunities, as well as a strong candidate for hosting additional higher-grade mineralization."

"We are approaching our halfway point in terms of metres drilled and are on track to easily surpass our originally planned 35,000 metres. At present we have two drills in operation at Colomac with the third now active at Treasure Island, located 12 kilometres to the north. Later in the program drills will be mobilized to some of our other high-priority regional prospects as we continue to advance our thesis that the Indin Lake Greenstone Belt has the potential to become Canada's next gold camp."

The Company commenced drilling at Colomac in early March and will continue until late September. With our increased exploration budget, we expect to complete in excess of 20,000 metres at Colomac, which along with the 17,319 metres completed in 2018 will form the basis of a resource update in 2020. Exploration activities will continue to concentrate on the discovery and expansion of higher-grade gold opportunities within the Colomac area sills and will also include expanded drill programs on some of Nighthawk's high-priority regional prospects while continuing aggressive field exploration programs throughout the Indin Lake Gold Property.Â

Zone 2.0 Drill Summary
Zone 2.0 is located near the centre of the Colomac Main sill and despite being the site of the former producing open pit mine, it remains unexplored to depth. Â In 2012, the Company drilled its first hole into the sill beneath the open pit, where hole C12-001B intersected 128 metres of 1.36 gpt Au, including 71.85 metres of 2.04 gpt Au, 46.15 metres of 2.81 gpt Au, and 8.65 metres of 6.83 gpt Au (see press release dated June 20, 2012), indicating the existence of new higher-grade mineralization that was unconstrained and open to depth. This first hole established the possibility, and helped define an exploration philosophy, that additional shoots probably exist along the sill that would represent a potential resource that had not previously been identified or explored.

To follow up on that early work nine holes were drilled over a 500-metre section of south-central Zone 2.0 to test for new areas of strong mineralization, to explore the plunge projection of previous drilled higher-grade areas, and to infill gaps in near-surface drill coverage (Figure 1). All holes intersected mineralization, including several broad intercepts with internal higher-grade cores (Table 1). The presence of well-developed mineralized widths within the sill, and corresponding signs of internal continuity of elevated grade within and between drill sections, are in accordance with the possible existence of high-grade domains. Additional drilling is required to better define this opportunity.

Hole C19-19, the most northern of the nine holes, targeted the depth extension of mineralization reported in a historical vertical hole, and intersected a wide zone of extensive mineralization 200 metres below surface returning 60.75 metres of 2.61 gpt Au, including 13.40 metres of 4.45 gpt Au, and including 7.75 metres of 6.85 gpt Au (Figure 2). A lower downhole interval assayed 3.20 gpt Au over 26.95 metres, including 8.15 metres of 5.16 gpt Au. The higher-grade core to the intercept may indicate the presence of a plunging shoot similar to Zone 1.5. This represents an exciting new opportunity, as in this part of the sill no other holes exist that would otherwise help to establish correlations laterally, thus the prospect remains open for exploration in both plunge directions. Two additional holes were drilled from the same setup to explore below C19-19 adding a further 140 metres of new coverage to depth. Results from those holes are pending.

Holes C19-13 and C19-13B were drilled 210 metres southwest of C19-19 to explore an opening in drill coverage to depth and to test the projected extension of strong mineralization intersected in C18-26 and C18-26B (see press release dated November 19, 2018).Â Both C18-26 series holes intersected shallow but extensive mineralization highlighted by 25.25 metres of 3.42 gpt Au, including 12.75 metres of 5.05 gpt Au, and 7.25 metres of 7.10 gpt Au, and outlined a higher-grade internal core that appears to plunge steeply to the north (Figure 3A). Holes C19-13 and C19-13B encountered mineralization to a vertical depth of 280 metres but not to the same extent, perhaps an indication that the mineralization intersected by the C18-26 holes projects deeper on this section.

Holes C19-16 and C19-16B were collared 50 metres south of C19-13 to infill a gap in drill coverage and explore the downplunge projection of mineralization intersected in the C18-26 series holes (Figure 1). Similar mineralization to what was reported for the C19-13 holes was intersected to a depth of 230 metres, suggesting the holes may have tracked above the north plunging higher-grade corridor on this section. Additional infill drilling is needed to better define the zone's plunging geometry.

Holes C19-12 and C19-12B lie 150 metres southwest of C19-16 and 15 metres north of C18-26 (Figure 1). They were established to continue drilling the section to depth below the C18-26 holes (Figure 3A). The shallower hole, C19-12, intersected 55.00 metres of 2.31 gpt Au, including 27.00 metres of 3.10 gpt Au gold, and including 7.50 metres of 7.31 gpt Au, and 3.75 metres of 13.78 gpt Au, while the steeper hole C19-12B intersected a broad area of lower-grade mineralization as it appears to have undercut the zone's north plunging higher-grade core (Figure 3B). The four holes now completed on this section have traced continuous higher-grade mineralization from the near surface to 350 metres depth and open. Additional drilling is required to better constrain the zone downplunge to the north.

C19-09 and C19-09B were drilled to explore the southern up-plunge extension of the mineralization intersected by the C19-12 and C18-26 series holes. The holes were collared 75 metres south of C19-12 to explore a shallow region between 125 metres to 200 metres below surface (Figure 1). Although both holes intersected mineralization, they may have tracked too deep on this section and undercut the zone's higher-grade core. Additional shallow drilling is being considered to better define the zone's near surface geometry.

The Company has now reported on 25 holes representing 8,321 metres of its planned 35,000 metre to 40,000 metre 2019 drill program. All holes have intersected mineralization and continue to confirm the sill's capacity to host broad zones of continuous mineralization that typically surround internal cores of elevated grade. Given their considerable widths and depth extents, their grossly unexplored nature, and their potential to generate ounces, they represent extremely important exploration targets for the Company. 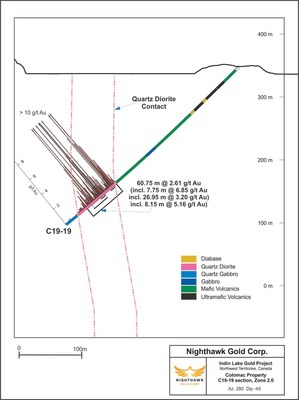 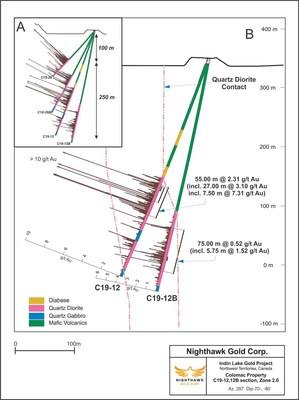 Forward-Looking Information
This news release contains "forward-looking information" within the meaning of applicable Canadian securities legislation. Forward-looking information includes, but is not limited to, information with respect to the Company's continued exploration programs (including size and budget) and the ability to advance targets and the timing and results thereof; and the ability to expand the current resource at Colomac with additional drilling and the ability to discover and define new higher-grade gold zones including any impact on the overall grade. Generally, forward-looking information can be identified by the use of forward-looking terminology such as "plans", "expects", or "does not expect", "is expected", "budget", "scheduled", "estimates", "forecasts", "intends", "anticipates", or "does not anticipate", or "believes" or variations of such words and phrases or state that certain actions, events or results "may", "could", "would", "might", or "will be taken", "occur", or "be achieved".