Dr. Michael Byron, President and Chief Executive Officer said, "Treasure Island is one of several high-priority regional prospects that lie satellite to Colomac and given the underexplored status of the Indin Lake Gold Camp, we believe these prospects represent incredible opportunities for discovery and expansion. We consider regional prospects like Treasure Island that display excellent gold grades and mineralized widths as key components for strengthening any potential Colomac mining scenario."

"We recently concluded our 2019 drill program on our Indin Lake Gold Property, completing 110 holes for 40,834 metres and significantly exceeding last year's record of 32,500 metres, making it our most productive and efficient drill season to-date. We have now released results for 55 holes or 19,429 metres, leaving considerable news flow going forward. Over the past three years we have been fortunate to have the resources to aggressively expand our exploration activities and build on our regional gold camp strategy of discovering and evolving near-surface gold deposits within our emerging gold camp. Treasure Island is fundamental to this approach."

The Company has now completed its third drill campaign at Treasure Island. Its smaller 2011 maiden drill program successfully intersected and validated historical Main Zone mineralization along the southwest shore of the island (see press release dated May 31, 2011). In 2018 the company completed a larger follow-up program to trace known mineralization to depth and along strike, and to test new targets including its first drilling at the East Zone located 500 metres east of the Main Zone (see press release dated October 22, 2018). Broad areas of mineralization were intersected throughout the contact zone between steeply dipping mafic volcanic rocks to the north and greywacke units to the south.

Nighthawk's 2019 drill program followed up on the previous programs by testing new areas between and along strike of the two zones and exploring to greater depths by undercutting previous intersections. Nineteen holes were drilled (5,816 metres) of which two holes have been previously released (see press release dated September 5, 2019). All eight holes reported today were drilled within the Main Zone.

Nighthawk's drilling to-date has traced the Main Zone continuously for over 400 metres along strike, from surface to upwards of 200 metres vertical depth where it remains open. The Company has also begun to infill the region between the Main Zone and the East Zone to explore the linkage between the two zones and to determine if the high-grade nature of the Main Zone exists throughout the 700 metres of mineralized stratigraphy. Results from that drilling have not yet been received. Treasure Island represents a small part of the mineralized corridor's 7 km strike length. The remaining portion of the corridor represents a priority for Nighthawk to be investigated in its 2020 exploration program.

Treasure Island was Nighthawk's initial focus within this part of the Indin Lake Greenstone Belt; however, it was obvious that the regional geology was highly prospective being home to many historical and recently discovered gold showings including the Laurie Lake Showing ("Laurie Lake") and JPK. Laurie Lake lies near the western end of the Treasure Island – Laurie Lake Mineralized Corridor, 4 kilometres southwest of Treasure Island (Figure 1). Historical drilling references stacked mineralized zones with localized high-grade intercepts like those seen at Treasure Island, while historical surface samples have defined a broad distribution to the mineralization. Nighthawk has completed several field programs in the area successfully validating and building on the historical reports (see press release dated February 19, 2019).

The JPK gold showings are located at the eastern end of the mineralized corridor about 500 metres east of Treasure Island (Figure 1). Showings are hosted by iron formation similar to the Damoti Lake Gold deposit located 40 kilometres to the south. Historical surface sampling along a 550-metre section of iron formation outcrop returned assays ranging from 5.04 g/t Au to 15.63 g/t Au. Nighthawk's sampling along a 3.0-kilometre section of the iron formation returned grab samples that assayed up to 12.10 g/t Au, confirming the historical results. No drilling has been reported for this area. JPK remains a vastly underexplored target with significant upside potential, like most of the Treasure Island – Laurie Lake Mineralized Corridor.

The Indin Lake Greenstone Belt ("Indin Lake"), is home to one of the few remaining under-explored gold camps in Canada - the Indin Lake Gold Camp. It's host to several gold deposits and showings, the most significant being the past-producing Colomac open pit gold mine, located within the north-central portion of the Company's Indin Lake Gold Property.

Consolidation of the gold camp began in 2010 and culminated with the acquisition of the Colomac Mine and surrounding mining leases in 2012. Nighthawk has secured all the gold mines, deposits, and showings to become the first company to combine the camp's best assets and prospective opportunities under one ownership. Follow this link to learn more about our plans for developing the Indin Lake Gold Camp. 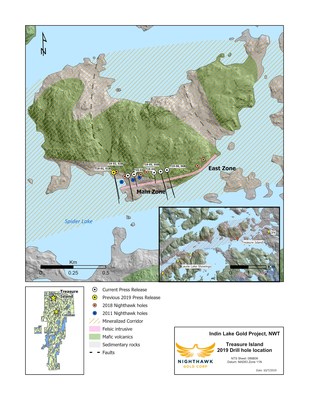 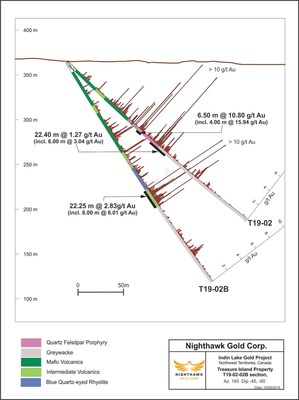 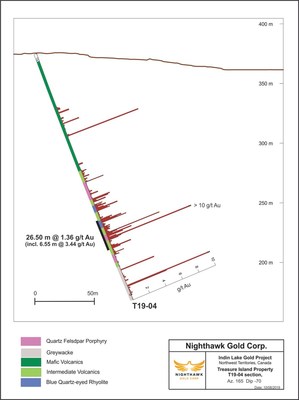 Technical Information
Nighthawk has implemented a quality-control program to comply with best practices in the sampling and analysis of drill core. Drill core samples were transported in security-sealed bags for analyses at ALS Global Assay Laboratory in Vancouver, BC ("ALS Global"). ALS Global is an ISO/IEC 17025 accredited laboratory. Pulp and metallics assaying for gold was conducted on the entire pulverized sample.

This news release contains "forward-looking information" within the meaning of applicable Canadian securities legislation. Forward-looking information includes, but is not limited to, information with respect to the Company's continued exploration programs in 2010 (including size and budget) and the ability to advance targets and the timing and results thereof; the ability to raise the necessary capital on acceptable terms in order to conduct exploration programs including mapping, prospecting and drilling activities and identify new targets in future years, as well as any intention to expand these programs in the future. Generally, forward-looking information can be identified by the use of forward-looking terminology such as "plans", "expects", or "does not expect", "is expected", "budget", "scheduled", "estimates", "forecasts", "intends", "anticipates", or "does not anticipate", or "believes" or variations of such words and phrases or state that certain actions, events or results "may", "could", "would", "might", or "will be taken", "occur", or "be achieved".

Forward-looking information is based on the opinions and estimates of management at the date the information is made, and is based on a number of assumptions and is subject to known and unknown risks, uncertainties and other factors that may cause the actual results, level of activity, performance or achievements of Nighthawk to be materially different from those expressed or implied by such forward-looking information, including risks associated with the exploration, development and mining such as economic factors as they effect exploration, future commodity prices, changes in foreign exchange and interest rates, actual results of current exploration activities, government regulation, political or economic developments, environmental risks, permitting timelines, capital expenditures, operating or technical difficulties in connection with development activities, employee relations, the speculative nature of gold exploration and development, including the risks of diminishing quantities of grades of reserves, contests over title to properties, and changes in project parameters as plans continue to be refined as well as those risk factors discussed in Nighthawk's annual information form for the year ended December 31, 2018, available on www.sedar.com. Although Nighthawk has attempted to identify important factors that could cause actual results to differ materially from those contained in forward-looking information, there may be other factors that cause results not to be as anticipated, estimated or intended. There can be no assurance that such information will prove to be accurate, as actual results and future events could differ materially from those anticipated in such information. Accordingly, readers should not place undue reliance on forward-looking information. Nighthawk does not undertake to update any forward-looking information, except in accordance with applicable securities laws.